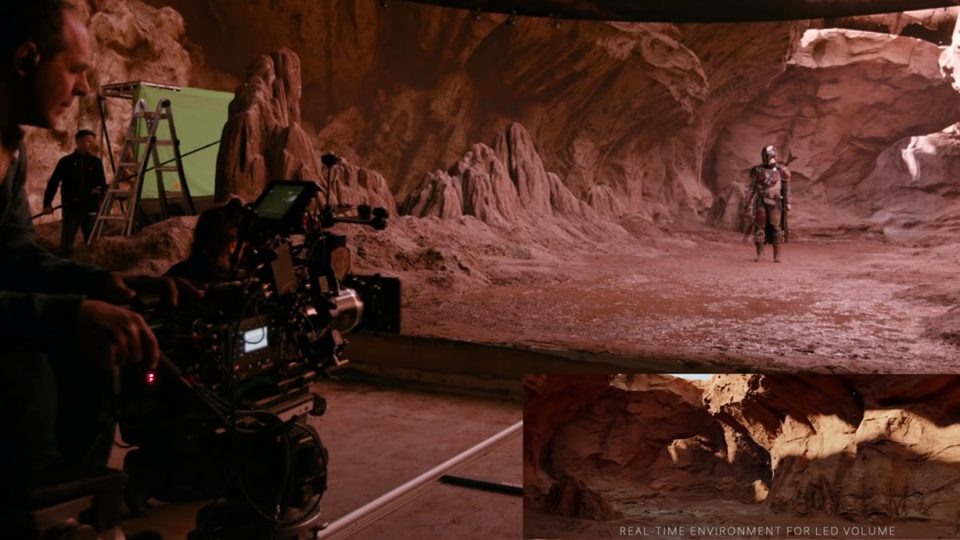 It’s no secret that the production industry has had to adapt to the new normal over the last year. With full-scale film and episodic productions pretty much coming to a standstill and virtual production (VP) tools becoming *the* way to create content in 2020, we chatted to our motion designer and 3D artist Nick Temple and his thoughts on VP.  Nick also attended the Unreal Build: Virtual Production event last week so brings with him the latest virtual production news!

First off, what is virtual production (VP) and what are the key types of VP that we should be looking out for?

The most prominent method of VP you’ll see at the moment is  Live LED Wall In-Camera Virtual Production. This refers to a large LED wall setup that encompasses the performers. Often it is complemented with real-world props and scenery to create a hybrid environment on set.

This isn’t the only technique though. Others include  Performance and Facial Capture  that you’ve probably seen in full CG animated films and TV shows like Lion King, Star Wars: The Clone Wars, Avatar and many more over the last couple of decades.

See below where director Dave Filoni is on set in a performance capture volume for Star Wars: The Clone Wars. The stunt performers are being live captured on to pre-viz versions of their characters. Filoni is also able to operate a virtual camera in the volume to block out shots in real-time with the actors. 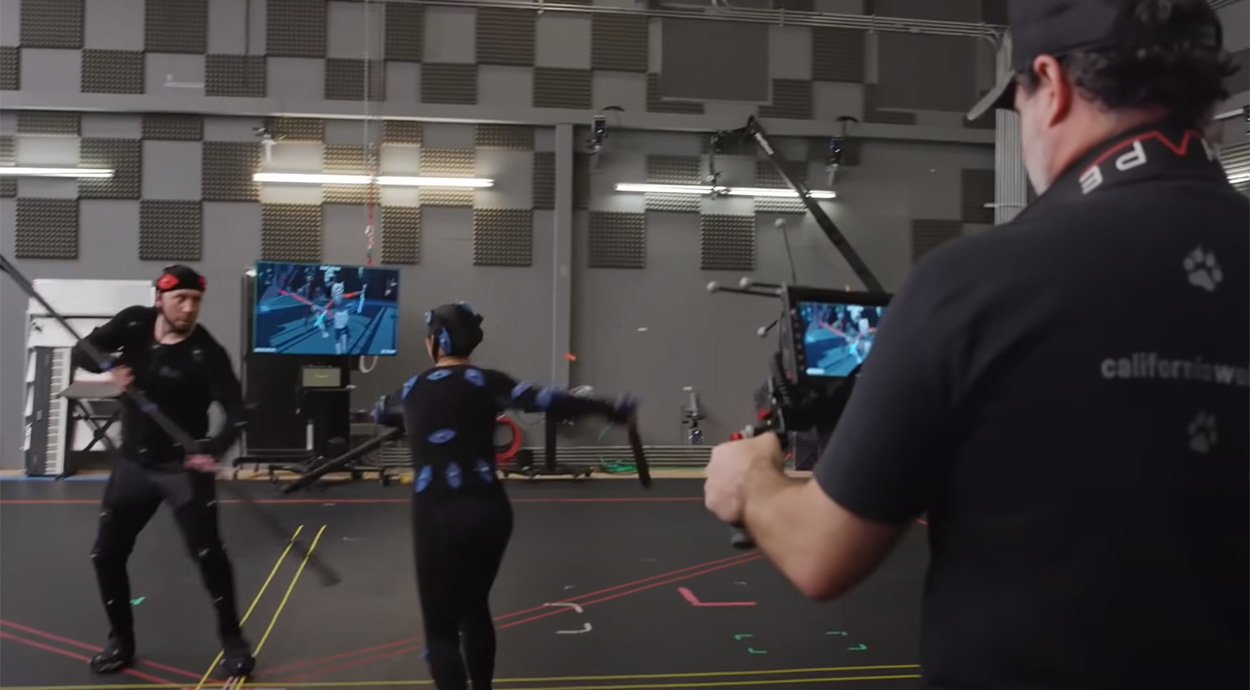 Lastly, we have Hybrid Virtual Production. This is a mash-up of traditional greenscreen techniques and virtual production. Some examples you have definitely seen would be on most popular news channels when the presenter is being live composited into a virtual set. Here’s an impressive example that the Weather Channel used to show the dangers of rising floodwater.

How has VP affected the general production workflow? (pre and post)

It has flipped the whole thing on its head. This is because so much early planning and collaboration need to go into VP shoots. In certain cases, you’re looking to get almost finished shots straight out of the camera. For this, you need to be meticulous with your preparations beforehand.

The diagram below (taken from Unreal Engines Virtual Production Field Guide) shows the difference between traditional and virtual production when used for film and TV. 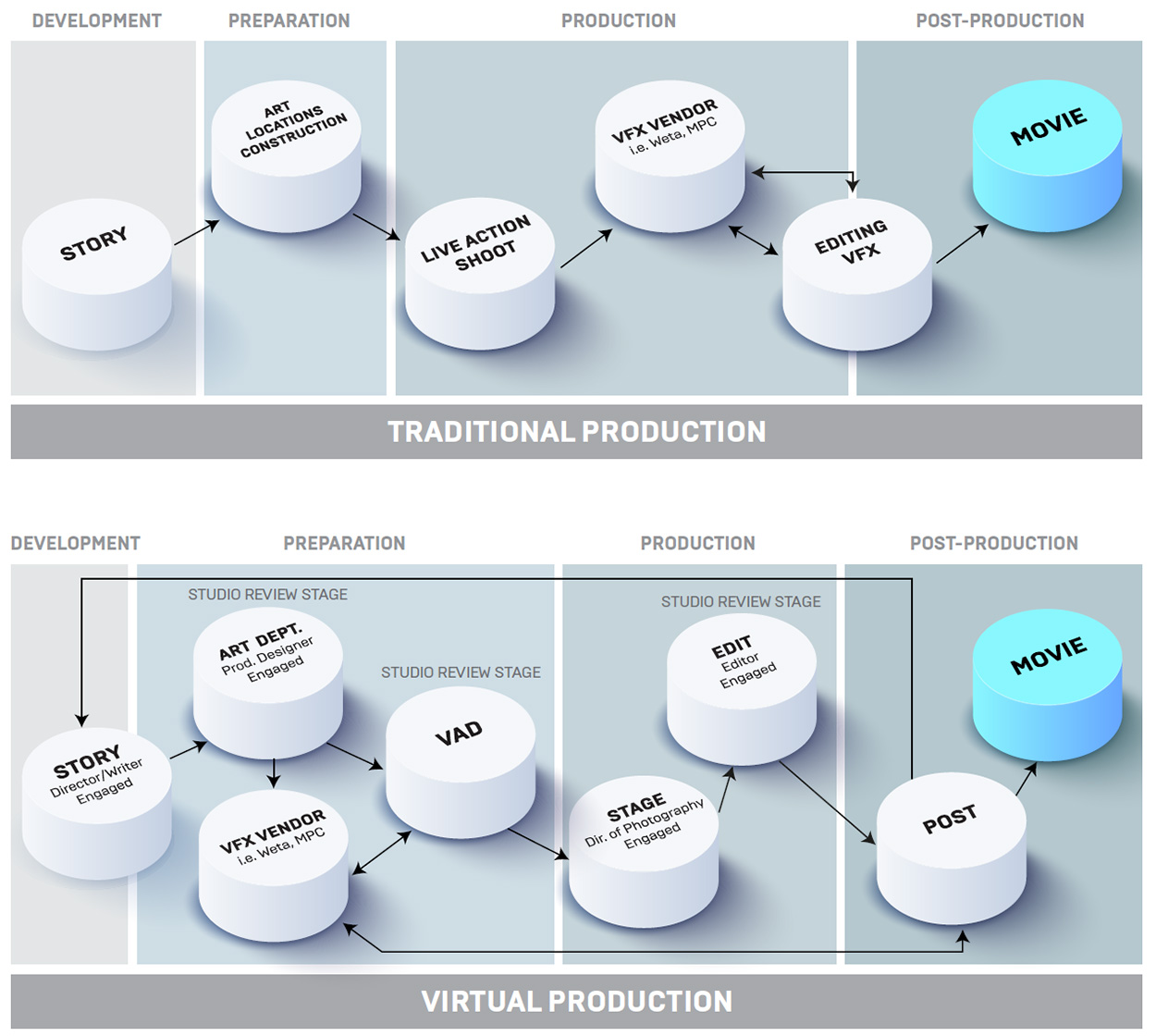 “Back in the day, if there was a microphone that dipped into the top of the frame, that shot was unusable, right? So, you had to do another take to protect yourself. Now if that happens, you say, all right, let’s move on! Because we’ll paint it out. This shot that could have been completely done in the camera has now become a visual effects shot. And it costs probably three times more money to paint that microphone out than it would have if you had just taken another 10 minutes and done the shot again.”

What Robert is saying here is that filmmakers looking to use VP need to take a lesson from decades ago. Basically, you shouldn’t just ‘wing it’, you need to forget any past bad habits and then plan and execute flawlessly!

What are the key advantages of VP?

The biggest problem with the current way of doing things is no one really knows what the final product will look like. VP, however, allows for everyone involved in a project to feel much more connected to the final product from the get-go. From allowing camera ops to move a virtual camera on set in the final environment to actors being able to see the world they’re performing in, VP takes an element of guesswork out of the process and lets filmmakers focus on their craft and the content itself.

Have you seen a change in the way clients are approaching content production since the advent of Covid-19?

This is an interesting one. Because VP is so heavily rooted in game engines, multiplayer is already factored in. If you have a VR headset and a capable computer, you can remote live link yourself onto a set on the other side of the world! You will still have the same issues with the crew on set though, so masks are still required for that part of the team! 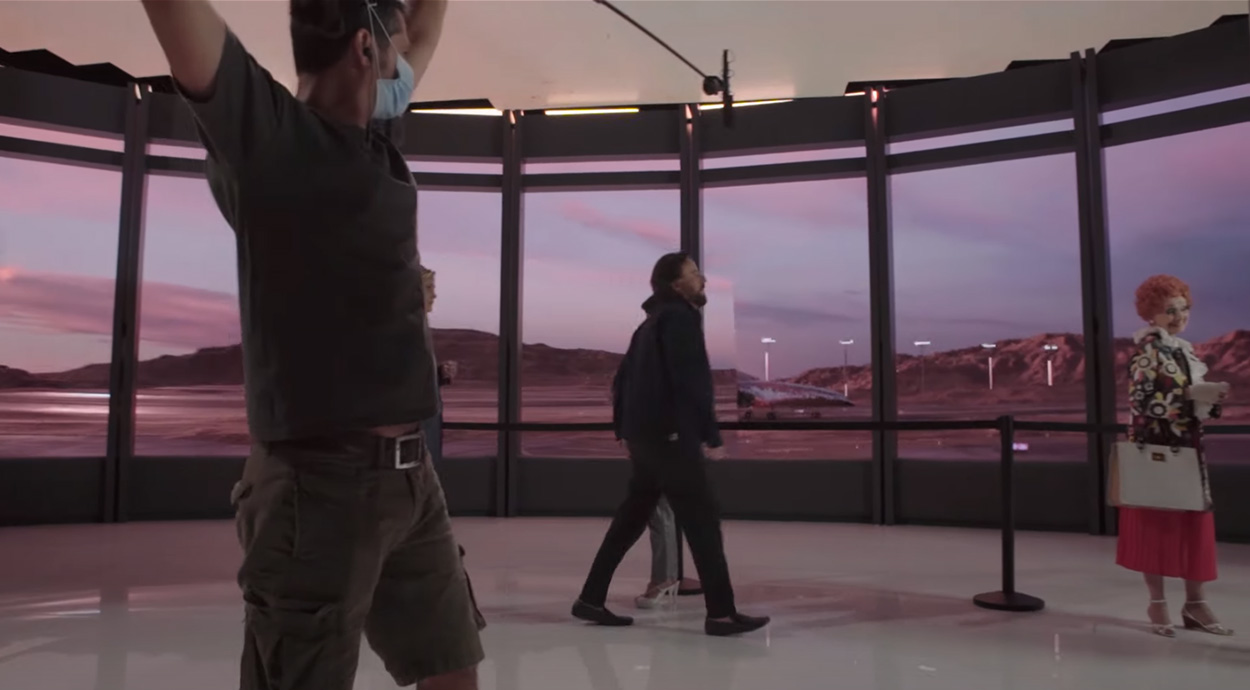 How can I use Virtual Production in my next project?

This depends on your project. Your production team and the client need to be sure about what they’re making. And then plan out the process carefully from start to finish.

Some virtual production techniques are more accessible than others. Hybrid greenscreen and VP is probably the best way to start as you can use familiar techniques complemented with less intimidating and costly tech. There are already many indie filmmakers using these techniques so consider it for your next shoot!

Is VP here to stay?

Yes! It’s been around in one form or another for years, the terminology just hasn’t really formed a cohesive basis until recently. The technology is evolving all the time and now with incredible case studies like The Mandalorian, more and more studio executives, filmmakers and advertising agencies will be considering how they can take advantage of the cost savings and boost in creativity that VP can bring.

Saying that the technology does need to get cheaper and more accessible for smaller studios and budget levels. An LED wall is expensive to set up and for most small to medium-sized projects not realistic. Then there’s also the massive task of training people to use the technology and retraining those who are more traditional roles are evolving to suit virtual production methods. But, after watching this sizzle reel, I for one am very excited to see where this technology takes production next!

If you want to know more about Pebble Studios’ production offering, please get in touch below.

Having co-founded the business in 2011, Matt is our fearless creative lead on all things moving image. He also has a huge passion for the world of VR and its evolving role in storytelling. 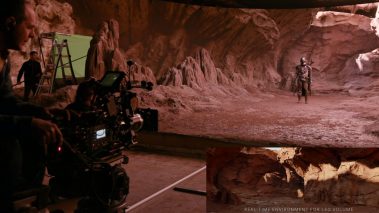 Our Quest for VR Perfection

Putting your fans first – cheers to that