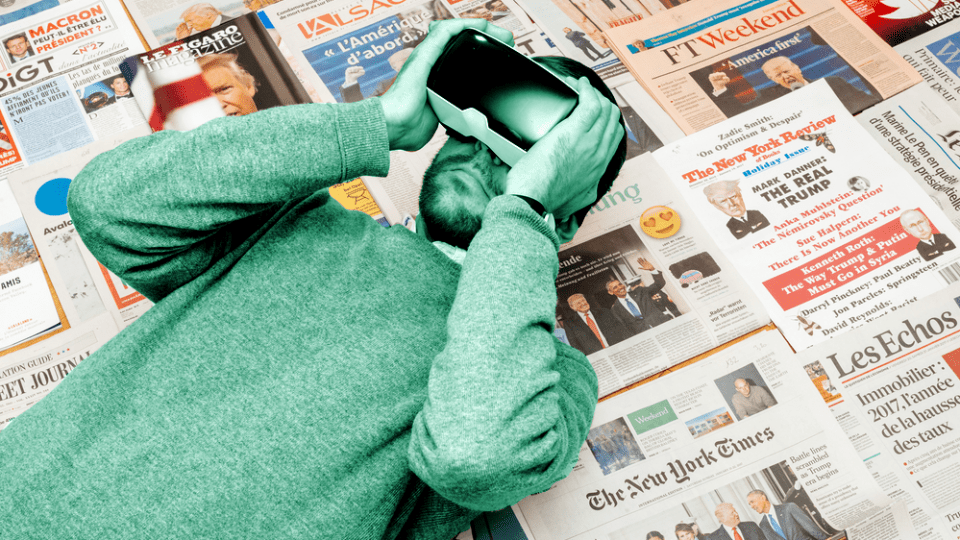 VR in Journalism: The power of a virtual story

Storytelling is one of the oldest skills in the book and for the world of journalism, it’s a key ingredient to breaking any kind of news. But with tech advancing and so many strands of news brands out there, the gen pop has occasionally felt a little disconnected over the past few years. One of the first to adapt to new ways of working, the journalism world could benefit from this surge in the virtual story format. With fresh ways to connect, create empathy with an audience and tell stories in different ways, the virtual realm is about to revolutionise storytelling and journalism, in one swoop.

Virtual Reality journalism, AKA immersive journalism, has the power to transport its audience to the front lines of any story. Don your headset and instantly you are witness to perspectives across the other side of the world. Print and TV news, can be informative, but it is easy to feel separate and removed from these mediums. Other forms of journalism often need the viewer to apply more of their imagination in order to truly understand what those in the story are going through. But where storytelling really comes into its own, is in the realm of virtual reality.

Nonny de la Peña, ‘the Godmother of Virtual Reality’, was the first journalist to realise the potential it has to immerse its viewers. The Godmother’s first foray into this virtual world bought us, “Hunger in Los Angeles” –  an emotive look into the food shortage amongst poorer American communities. The use of, all be it, basic animation coupled with actual sound recordings of a diabetic collapsing in a que for a food charity, results in a thought provoking VR experience.

“I was completely floored by that experience (almost literally — I remember sitting down after taking off the goggles), and it changed the way that I think about what we do in journalism.” – Dan Pacheco, The Director of Journalism at Syracuse University.

Clearly an effective storytelling tool, this techs immersive nature means that the audience is no longer passive. The viewer takes on an essential role in the action, understanding and feeling for those whose story they are experiencing.

But why is Virtual Reality the perfect tool for journalists? Many believe it is its ability to create this sense of ‘feeling’ – an empathy between the viewers and those in the story. Chris Milk, the infamous music video director, had his first VR experience with Peña’s ‘Hunger in L.A.’. Calling it the “ultimate empathy machine”, Milk was clearly inspired by this medium, later founding and becoming CEO of the Virtual platform ‘Within’ – a platform featuring both up to date news and entertainment in equal amounts.

The levels of empathy are also increased by the fact that VR journalism is accessible to pretty much anyone. Well, anyone that owns a smartphone that is. The New York Times, whose very tagline is, ‘All it takes is a smartphone’, brought us ‘Ivory Burn’ in 2016. This experience depicts a burning pile of elephant tusks, a mere $1,000,000 worth, going up in a blaze of glory. Such a strong statement would ordinarily not have been easily communicated across traditional mediums, but through VR, President Uhuru Kenyatta of Kenya was able to show the lengths his country will go to in order to end illegal ivory trade.

The New York Times kicked off their VR channel back in 2015 and they aren’t the only global news outlet jumping on the virtual band wagon. CNN launched ‘CNNVR’ earlier this year. Hop on this virtual channel and you could be attending a Trump rally or witnessing the controversial Running of the Bulls in Pamplona.

The Guardian too has been dipping their toes in the Virtual pool. Its ‘6X9: Solitary confinement’ is an incredibly immersive journalistic experience demonstrating what life is like in solitary confinement; something the majority of us would find hard to imagine.

The Huffington Post eager to not get left behind in the wake of this tech, recently acquired RYOT VR, another virtual platform. Molly Swenson, the Chief Operating Officer of RYOT, strongly believes in its storytelling powers. She went on to say, “Virtual reality affords us the opportunity to see the world through a fresh pair of eyes. You are seeing, hearing and sensationally stepping inside a moment, a place, a community other than your own. It breaks down barriers like nothing else.”

The role of journalism has always been to act as the fourth estate. A watchful eye over those in power, a tool of truth for the masses. Surely, any tech that furthers a journo’s ability to put a story out in the world is progressive. But, this technology is different. Confusion is occurring and the people who the stories are shared with cannot be called an audience, a reader, or even a viewer – they are now participants.

The future of Virtual Reality journalism is a rosy one, it is already changing the way we get our news and in a globalised society, making those across the globe who lead very different lives feel that little bit closer. It might not be too long until Trevor McDonald is virtually beaming at you, from the comfort of your own curated platform.