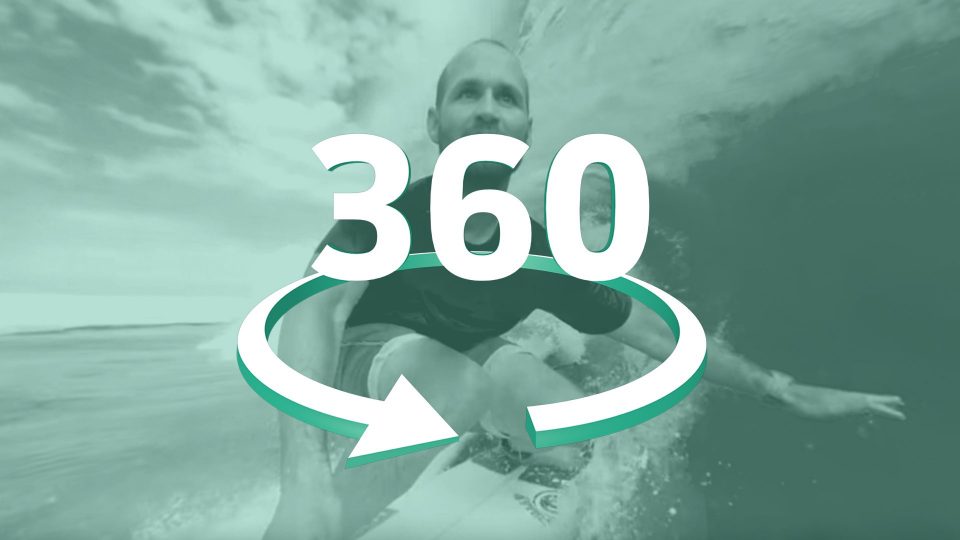 The world of 360 Video hit the mainstream in 2015 when YouTube decided to dedicate a channel to the new genre. As with any new tech, it takes some getting used to.

360 Video is filmed with special multi-lens cameras that allow you to click and drag so you can see in any direction by clicking and dragging the screen. Think Google Street View, but with a moving picture.

The possibilities seem endless at first glance. The big videos on YouTube’s #360Video channel take you into the cockpit of a fighter jet and a Formula One racing car. It’s almost like being there – check out the steering wheel or the speedo, look behind you, in front, up, down – anywhere you like.

So far though, the take up has been moderate. YouTube’s biggest #360Video is a music video by Swedish DJ Avicii, of his song Waiting For Love. It has around 15million views – tiny compared to his official video for exactly the same song which has ten times as many, and peanuts compared to the “Billion View Club” of Taylor Swift, Justin Bieber and Psy. Even a promo for Star Wars: The Force Awakens in 360 degrees didn’t achieve as much hype as the standard 2D trailers.

There are still so many ways that 360 videos can be used, though, and this one from Samsung is a perfect example of just how successful 360 video can be, receiving over 14 million views. In this video, you get to experience the life of a surfer and see how they tackle waves in Tahiti.

Right now, in a two-dimensional world of flat screened TVs and phones, 360-degree video is easily dismissed as a gimmick. As a user experience, 360 Video can be awkward – you have to actively seek out the interesting thing. It’s much easier and more enjoyable to let the camera operator frame the shot for you.

That could change overnight if Virtual Reality proves to be the big hit that everyone expects. VR headsets like the Oculus Rift, HTC’s Vive, Playstation VR and even Google Cardboard are all due to launch in 2016 and they could be game-changers.

Instead of having to click and drag to see a 360 video, with a VR headset you can just turn your head. All the people who buy a VR headset to play games – the main vehicle for virtual reality hype – will want to do other things with their expensive new toys, and a 360 Video is far cheaper to make than a graphics-heavy game.

At the moment, most 360 videos are ride-alongs like the fighter jet and the Red Bull F1 car, with one or two music videos like Avicii and Bjork. This is a world away from the cat videos, pranks, how tos and tutorials, and consumer guides that are the most popular types of YouTube video.

Perhaps the first take up will be another YouTube favourite – the Let’s Play video. YouTubers like Stampy Longnose and PewDiePie have hooked a generation of kids who love watching them play games like Minecraft. Watching a 360 video of someone playing a VR game could give the genre a major boost.

Perhaps the biggest hurdle to clear for 360 video makers is the fact that freedom for viewers is a limiting for video directors. We’ve grown up being used to movies and TV shows grabbing our attention by focusing a shot. 360 Video can’t do that, which makes it harder for a movie director to tell a story – and every successful video or short film has some sort of story. Instead of making us watch something, 360 Video directors have to entice us instead.

That could work spectacularly well in some genres. Imagine a movie like ’Twelve Angry Men’ which stars Henry Fonda as a juror deliberating over a defendant’s fate. If the story was told in one, long continuous take, it could be extraordinarily compelling in 360 Video.

Sports are another obvious application. Imagine a 360 camera strapped to a referee’s head – a superior GoPro that not only puts you at the heart of a football match but lets viewers choose where to look. As a one-off ride-along, the F1 car is interesting – as part of the live action of a race, it’s another proposition entirely.

So are 360 Videos just a fad? It may depend on the future of Virtual Reality, but plenty of people are betting it will be a success (including us). If you’re interested in creating a 360 video please feel free to give us a call on 02079935112 or email rachel.cahill@pebblestudios.co.uk.